US Cargo Plane Arrives in N. Korea to Receive US War Remains 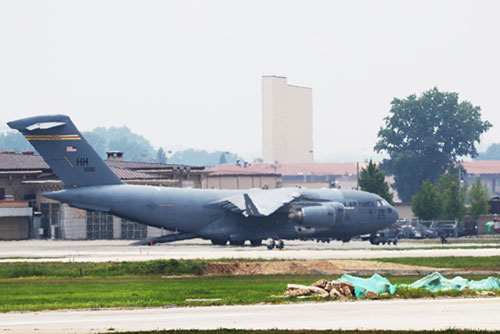 A U.S. military transport plane has arrived in North Korea to receive the remains of American service members killed in the Korean War.

A Seoul official said that the plane departed Osan Air Base, south of Seoul, at around 6 a.m. Friday, and arrived at the North's Kalma Airport at around 7 a.m.

The official said that 55 wooden boxes were sent to North Korea for the repatriation. It is not currently known how many sets of remains will be transferred.

The cargo plane will reportedly return to Osan Friday carrying the remains after officials from the U.S. Defense POW/MIA Accounting Agency conduct an initial inspection.

The remains will then be airlifted to a forensic lab in Hawaii around Wednesday.

Friday marks the 65th anniversary of the signing of the armistice agreement that ended the three-year Korean War.
Share
Print
List