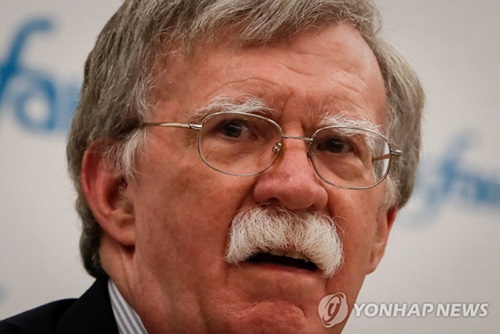 Anchor: U.S. National Security Adviser John Bolton has reasserted that the two Koreas have agreed to a one-year timetable for the North's denuclearization. He also said Secretary of State Mike Pompeo will make his fourth visit to North Korea soon.
Our Bae Joo-yon has more.

Report: In an interview with ABC's This Week on Sunday, U.S. National Security Adviser John Bolton said he thinks North Korea could denuclearize within a year, adding the one year period is something the two Koreas have already agreed upon.

[Sound bite: U.S. National Security Adviser John Bolton (Aug. 19 / ABC "This Week")]
“So the one year period that we’ve talked about from the point where North Korea makes the strategic decision to denuclearize is something that the North and South Koreans have already agreed to.”

Bolton said this is why U.S. President Donald Trump “has gone out of his way to hold the door open for Kim Jong-un” and that’s what his summit with Kim in Singapore was about.

He added that he thinks Pompeo will be returning to Pyongyang soon for his fourth visit, saying the secretary of state has done extraordinary follow-up diplomacy after the Singapore summit. It marked the first time for a key Washington official to publicly confirm that another visit to the North by Pompeo is imminent.

When asked about his criticism that North Korea has not taken steps to dismantle its nuclear program, Bolton stressed that it's important North Korea demonstrate seriousness. He reiterated that getting the North to denuclearize remains the “highest priority” for the U.S.

Earlier this month in an interview with Fox News, Bolton, who is considered to be a hardliner on North Korea, said that Kim Jong-un had promised South Korean President Moon Jae-in during their summit in April that Pyongyang will denuclearize within a year.

Bolton’s remarks come as the North has reportedly agreed to an on-site inspection of its missile launch site by a UN aviation watchdog to ensure the safety of international flights.

According to Japan's Kyodo News on Sunday, North Korea agreed to allow a group of inspectors from the UN International Civil Aviation Organization(ICAO) to visit the country and verify its pledged suspension of unannounced missile launches.

Choi Kang, vice president of the Asan Institute for Policy Studies, told KBS World Radio News that the move suggests North Korea is willing to accept inspections by international organizations although not the U.S. The security expert, however, cautioned that Pyongyang could use the opportunity to strengthen its assertion that its ballistic missile tests are part of a satellite program. Kang also said it would be noteworthy if the ICAO obtains a list of the North's missile launches to date.
Bae Joo-yon, KBS World Radio News.
Share
Print
List