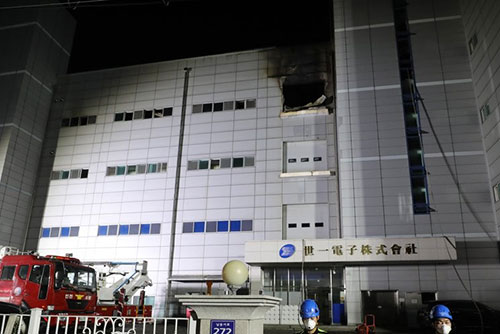 A massive fire erupted at a factory of an electronic products’ manufacturer in Incheon on Tuesday, killing nine people.

According to the city's fire authorities, the blaze broke out at the Seil Electronics’ assembly line located within Incehon’s Namdong Industrial Complex at 3:43 p.m. on Tuesday.

The fire was put out about two hours later with around 60 fire fighters and 45 fire trucks and ambulances mobilized to contain it.

Nine factory workers were confirmed dead as of Tuesday afternoon, while four others were hurt, some seriously.

Four female workers were known to have jumped off the fourth floor before rescuers arrived. Authorities presume the fire broke out at a laboratory on the fourth floor.
Share
Print
List