Typhoon Soulik Heading Up Toward Peninsula 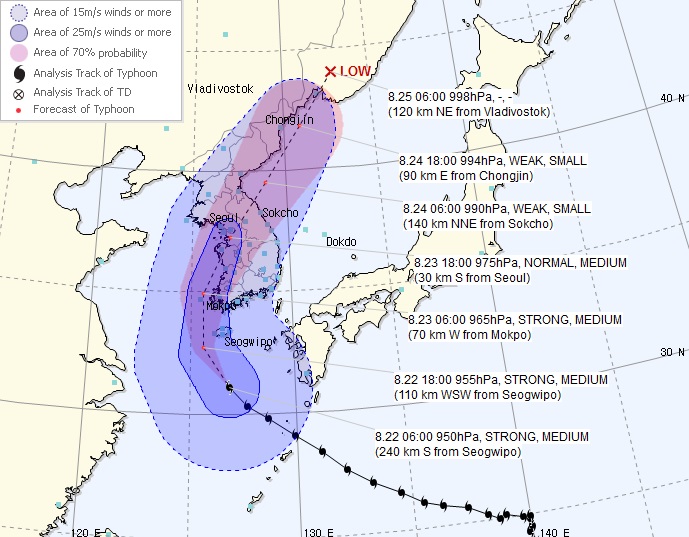 Anchor: Typhoon Soulik is approaching the country's southern Jeju Island and expected to pass through the capital area early Friday. The weather agency has called for extra caution and preparations to prevent damage against heavy rains and strong winds.
Our Park Jong-hong has this report.

Report: The nation is on high alert and bracing for impact as Typhoon Soulik makes its way up toward the Korean Peninsula.

The Korea Meteorological Administration has forecast up to 400 millimeters of torrential rains on Jeju Island and southern coastal areas in South Jeolla Province, the first two regions Soulik is expected to reach.

Packing winds of up to 43 meters per second, the typhoon is feared to bring damage in its wake. Experts say such winds are strong enough to shatter windows and even tear down some homes.

People across the nation have been told to prepare by securing windows and clearing drainage systems to prevent wind and flood damage.

So far on Jeju Island, 23 schools have either pushed back the time school starts or temporarily shut down until the worst is over.

National parks around the country have been closed off to hikers. Ferry services in the southern region have been suspended and boats and ships have been ordered to drop anchors at docks and ports.

Evacuation centers have also been set up with relief supplies for possible displaced persons whose homes may get washed away.

By Thursday afternoon, Soulik is expected to pass through waters off Mokpo in South Jeolla province on the southwestern part of the peninsula.

Soulik is then expected to make its way inland, passing through areas including the capital region, before exiting into the East Sea on Friday.
Park Jong-hong, KBS World Radio News.
Share
Print
List