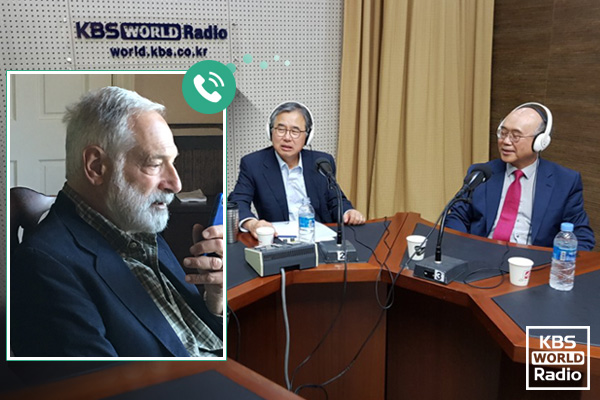 Anchor: In the first installation of a special three-part roundtable series to air on KBS World Radio’s Korea24, three experts discussed the possibility of North Korea’s denuclearization and how Seoul and Washington should coordinate their efforts to accelerate the process.
Choi You Sun has the details.

Report: Robert Gallucci, the chief U.S. negotiator during the North Korean nuclear crisis of 1994 says the North will always be a country that can quickly replenish its nuclear weapons capability, saying it will forever be a "recessed nuclear weapons state."

[Sound bite: Robert L. Gallucci –  Professor of Diplomacy at Georgetown University]
"Even if the North made its declaration and allowed incredibly intrusive inspections, at the end of the day, neither the ROK, the U.S.A., the IAEA or any other entity could ever be sure that the North didn't have somewhere tens of nuclear weapons stored for a situation in which the trust in the U.S. and the ROK were to disappear. So they will forever be, what one of my colleagues called a recessed nuclear weapons state."

While arguing that North Korea watchers should stop asking whether Pyongyang will ever give up its nuclear weapons, as it can't, Gallucci provided the case of Japan as a model.

[Sound bite: Robert L. Gallucci –  Professor of Diplomacy at Georgetown University]
"I think the denuclearizing mission can succeed and succeed in a way that will bring stability to North East Asia... Japan has enormous overhang of separated plutonium. And I could ask - I don't know what your technical capabilities are, but if we're going to say how long it would take Japan to build a small arsenal of nuclear weapons given the fact that they already have separated plutonium and a great deal of technical expertise, I don't know what you would say but my answer would be it would not take a full year. So Japan has been called a 'recessed nuclear weapons state,' although it is a full member in good standing of the nuclear non-proliferation treaty."

In the wake of the stalemate in Washington's nuclear negotiations with Pyongyang, Dr. Choi Kang, the vice president of The Asan Institute for Policy Studies suggested Seoul and Washington may be at odds over how to proceed with the nuclear issue.

[Sound bite: Dr. Choi Kang - Vice President of The Asan Institute for Policy Studies]
"I think there are some friction between the two parties, the U.S. and South Korea, over how they’re going to deal with North Korea and that whether it’s time for engagement or it’s time for pressure. It seems to me that at this point in time, the U.S. is emphasizing the pressure aspect very much. It has been emphasizing an international coalition on pressing sanctions vis-a-vis North Korea."

Gallucci, who joined the discussion by phone stressed it would be vital for Seoul and Washington to prioritize their alliance, while coordinating ways to move forward in a transparent manner.

[Sound bite: Robert L. Gallucci –  Professor of Diplomacy at Georgetown University]
"I don’t know exactly what my government is planning here and whether there’s a division within my government about how to proceed. But it seems to me based upon our history, and by our I mean the ROK and the U.S., in dealing with the DPRK, we need to move roughly together as long as we’re in a situation of distrust, which we will be for quite a long time. And we need to take small steps and they need to be fairly transparent in what we’re doing and not too hard to figure out what they are."

Amid deep-rooted distrust, which the three panelists agreed remains between the U.S. and North Korea, Gallucci said the only way to make progress would be to simultaneously take steps toward both the North's denuclearization and the establishment of a peace regime.

Referring to U.S. President Donald Trump's recent tweet, in which he blamed China for the stalled nuclear negotiations, Dr. Paik Hak-soon of The Sejong Institute said linking the trade war with Beijing to the North Korean nuclear issue is not a good strategy.

[Sound bite: Dr. Paik Hak-soon – President of The Sejong Institute]
"He says if trade issues between the two countries is resolved, only then he will send Pompeo again to North Korea, then what is priority in U.S. policy, the trade war or denuclearization? This is a very awkward situation, not consistent in the U.S. official policy that top priority in dealing with North Korea is denuclearization itself."