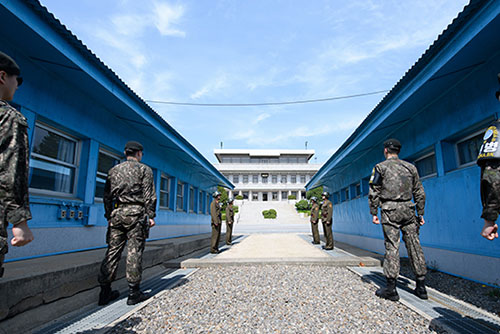 An inter-Korean agreement on halting all hostile activities on land, at sea and in the air will go into effect on Thursday.

The accord was adopted on September 19th during general-level talks to actively implement the military aspects of the Panmunjeom Declaration signed during the inter-Korean summit in April.

Under the accord, the two Koreas will create a five-kilometer-wide buffer zone on either side of the Military Demarcation Line(MDL) and suspend field training exercises conducted by artillery and regiment-level units.

At sea, artillery and training exercises will be halted at designated areas in the Yellow and East Sea. In addition, coastal artillery and guns on warships must be covered and portholes closed.

In the air, the two Koreas will create a 20 kilometer-wide no-flight zone along the western part of the MDL and a 40 kilometer-wide one along the eastern side. Exceptions will be made in the case of emergencies, such as forest fires and rescue operations.
Share
Print
List