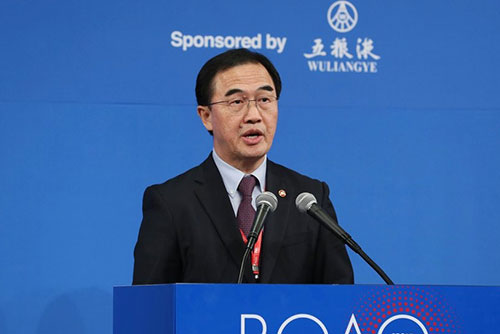 Unification Minister Cho Myoung-gyon says that cooperation with the international community is essential to achieve the level of economic development North Korea aims for, adding that goal cannot be attained without progress in denuclearization.

The minister gave a speech at the Seoul Conference of the Boao Forum for Asia held Tuesday, and said the South Korean government is explaining these points to North Korea whenever inter-Korean talks are held.

The minister said that North Korean officials also emphasize advancing the economy and improving the quality of life for North Korean citizens during cross-border dialogue and global meetings.

He said South Korea firmly abides by the goal of a complete denuclearization and respects and complies with the framework of global sanctions.

He added that Seoul will continue to closely cooperate with the international community both in the process of denuclearization and inter-Korean economic cooperation.
Share
Print
List