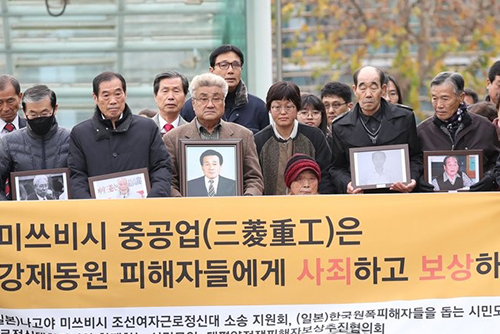 The Supreme Court has ruled in favor of five Korean victims of Japan's wartime forced labor who filed a damages suit against Japan's Mitsubishi Heavy Industries.

The court did not accept Mitsubishi’s claim that the women lost their right to seek compensation in accordance with a 1965 agreement on normalizing Seoul-Tokyo ties.

The court said seeking compensation for illegal acts against humanity that are related to Japan’s colonial rule do not fall under the 1965 deal.

Yang and the other four women were lured into forced labor at a Mitsubishi aircraft production plant in Nagoya, Japan in May 1944 at the end of the Pacific War.

The victims filed a lawsuit in Japan against Mitsubishi and the Japanese government in March 1999 demanding compensation, but they lost the case in a final ruling delivered by Japan's highest court in late 2008.

They then filed another suit in South Korea in 2012. In the first and second trials, the court ordered the Japanese firm to compensate the victims, saying Mitsubishi was responsible for its illegal acts against humanity.

Following those rulings, Mitsubishi filed an appeal with Korea's Supreme Court, claiming the Korean court holds no jurisdiction over the case and that compensation rights’ of forced labor victims no longer exist in accordance with the 1965 pact.
Share
Print
List