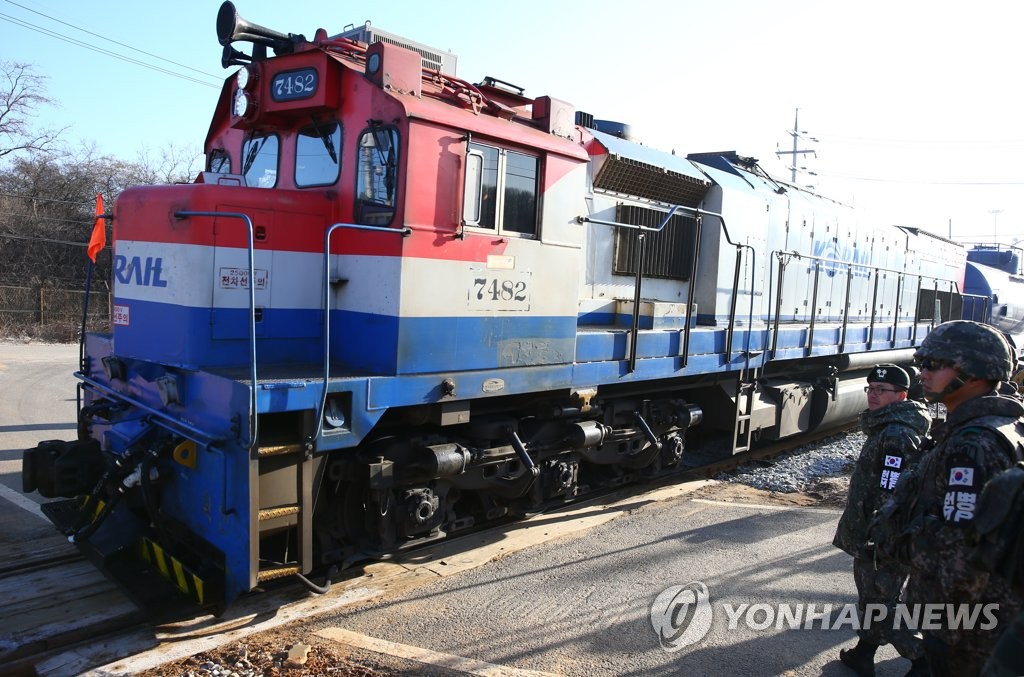 Anchor: A South Korean train is running in North Korea for the first time in over a decade. It is conducting a joint inter-Korean survey to reconnect and modernize railways. Ahead of its departure, a ceremony was held at Dorasan Station south of the border.
Kim Bum-soo has more.

The two Koreas have begun preliminary surveys to reconnect the severed inter-Korean railways.

For 18 days, the inspectors and their North Korean counterparts will check on the rail, bridge and tunnel conditions in the North by test running a train there.

A North Korean locomotive will pull the South Korean six-car train along the 400-kilometer Gyeongui Line connecting the inter-Korean border city of Gaeseong and Sinuiju, located in the Sino-North Korea border.

The train will then check the 800-kilometer Donghae Line on the eastern side of North Korea between Mount Geumgang and the Tumen River.

During a ceremony held at the border Dorasan train station in the South, Transport Minister Kim Hyun-mee said the project will expand Koreas' economic domain.

[Sound bite: Transport Minister Kim Hyun-mee (Korean)]
"The event today will signal inter-Korean co-prosperity by reconnecting the rail, which is the symbol of our division, and it will also be a catalyst to expand the economic territory of the Korean Peninsula, which is like an isolated island, to the Eurasian continent."

Unification Minister Cho Myoung-gyon said that Seoul will closely collaborate with related countries to get the international support needed to carry out the project.

[Sound bite: Unification Minister Cho Myoung-gyon (Korean)]
"The government will be steadfast in preparing for a groundbreaking ceremony within this year as the leaders of the South and the North agreed... The train going back and forth on the Korean Peninsula will deliver peace and prosperity to Northeast Asia and the world."

It is the first time in over a decade a South Korean train is running in North Korea, since a freighter operated across the border for a year following the 2007 inter-Korean summit.

To launch the joint survey, Seoul managed to persuade the UN Security Council and the U.S. to apply exemptions on nuclear and missile sanctions placed on the North. But proceeding further is a daunting task, requiring much progress in North Korean denuclearization and the lifting of more sanctions.
Kim Bum-soo, KBS World Radio News.
Share
Print
List