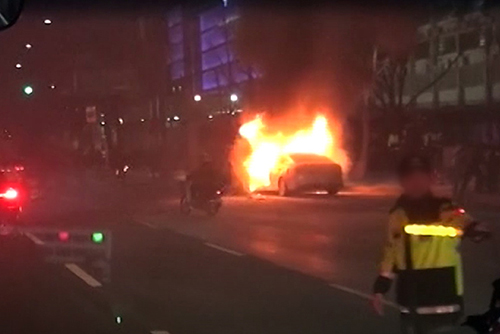 A taxi driver died in the hospital on Thursday after he apparently set fire to himself and his taxi.

Jongno Police Station in Seoul said the 65-year-old man, only identified by his surname Lim, died at 5:50 a.m.

According to police, a sedan taxi near Gwanghwamun Station in central Seoul caught fire on Wednesday evening. The driver was moved from his vehicle with severe burns on much of his body.

Lim reportedly told firefighters that he set himself on fire and has complaints about the government.

Lim's death is the second case in which a taxi driver apparently killed himself to protest the launch of a commercial carpool service app by Kakao.

Last month, a 57-year-old taxi driver from Seoul died after setting himself ablaze in protest of the ride-sharing service app.
Share
Print
List