Sports Committee to Have Outside Agencies Probe Violence, Sexual Assault 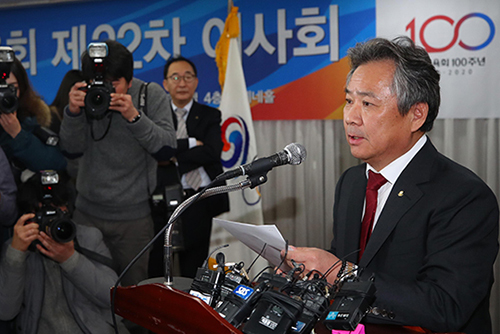 Anchor: The head of South Korea's highest sports committee held an apologetic news conference Tuesday over a series of allegations that coaches sexually assaulted their young trainees. The committee president said outside agencies would be commissioned to probe the allegations and root out chronic sexual violence in the nation's elite sports.
Bae Joo-yon has more.

The Korea Sports and Olympic Committee will commission outside agencies to investigate a series of sexual assault cases involving its member organizations.

The committee’s president, Lee Kee-heung, announced on Tuesday measures to root out chronic and widespread sexual violence in the nation's elite sports world.

[Sound bite: Lee Kee-heung - President, Korea Sports and Olympic Committee (Korean)]
“I would like to express gratitude and consolation to the victims who have spoken out amid their unspeakable pain. I would also like to extend my sincerest apologies to the public, government and businesspeople who have supported the nation’s sports sector.”

This came in the wake of a series of sexual assault accusations by Olympic champion speed skater Shim Suk-hee and judoka Shin Yu-yong. Both claim they were repeatedly raped by their then-coaches.

The committee plans to immediately expel member organizations that were found to have systematically concealed or overlooked violence and sexual assault. It will also hold accountable key figures of such organizations.

The committee will thoroughly probe the Korea Skating Union and exert all-out efforts to normalize the organization’s operations.

The committee also vowed to overhaul the current elite sports system, which is dominated by a performance-driven culture. In particular, the committee pledged to fully revamp the current training system based on apprenticeship and under which athletes lodge together.