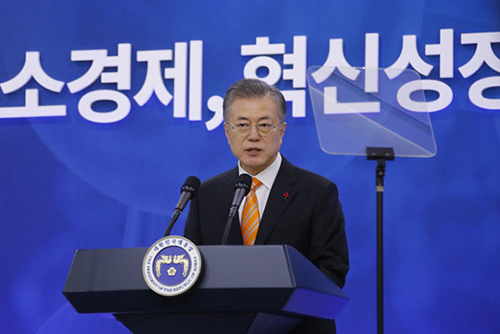 President Moon Jae-in says his government's determination to build a so-called hydrogen economy is firm, adding it would offer a golden opportunity for South Korea to set up a new growth engine while transforming its national energy system.

At a government-led event in the southeastern city of Ulsan on Thursday, Moon said the government's goal is to make the country become the world's number one exporter of hydrogen cars and fuel cell by 2030.

The government plans to rapidly increase the number of hydrogen-powered vehicles produced in the country to one-point-eight million with some 200-thousand new jobs expected in the new energy sector by 2030.

The president said should the number of hydrogen cars reach the government target by 2030, ten percent of 30-thousand tons of fine dust produced each year are forecast to be reduced.