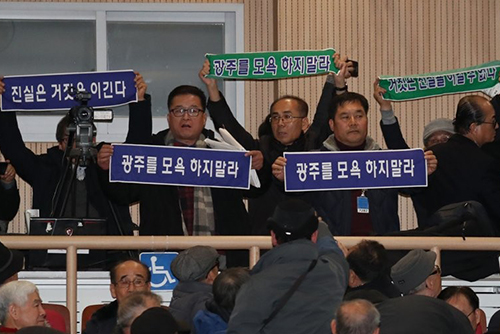 An alliance of civic groups is planning massive campaigns in protest of three main opposition lawmakers’ disparaging remarks about the May 18th, 1980 Gwangju Democratization Movement.

The groups, including those based in Gwangju, held a joint press conference in the southwestern city on Monday, where they revealed plans to visit the Seoul headquarters of the Liberty Korea Party(LKP) on Wednesday to denounce the remarks.

They said they will urge the conservative party to expel the three members, Representatives Kim Jin-tae, Lee Jong-myeong and Kim Soon-rye, and apologize for their remarks. In addition, the groups also seek to meet with the leaders of the ruling and opposition parties to call for legislation that would strengthen punishment for attempts at historical distortion.

The civic groups will hold a petition campaign to drive the three lawmakers out of politics.

Last Friday, the LKP lawmakers claimed North Korean soldiers could have systematically incited the protesters in Gwangju while calling those recognized for their contribution to the May uprising a "monster group.”

During the violent crackdown, hundreds of people are estimated to have been killed while many were beaten or even raped as Gwangju citizens took up arms from state armories and police stations.
Share
Print
List