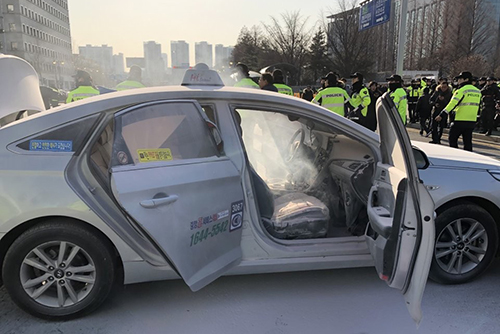 Another taxi driver has apparently attempted to set fire to himself amid ongoing talks between the taxi industry and Kakao Mobility over the company’s planned carpooling service.

The 62-year-old driver was found inside a burning taxi in front of the National Assembly in Seoul on Monday afternoon. The man, identified only by his surname Kim, was taken to a nearby hospital and treated for non-life threatening second-degree burns.

According to police, his smoke-filled taxi was heading toward the main gate of the parliament from across the street before it collided with another vehicle.

The driver, an executive member of a taxi industry union, was known to have frequented the funeral home of a fellow taxi driver who set himself ablaze in December in protest of the carpooling service.

Police suspect this latest case was an attempted self-immolation, but are continuing an investigation into the exact cause of the accident.
Share
Print
List