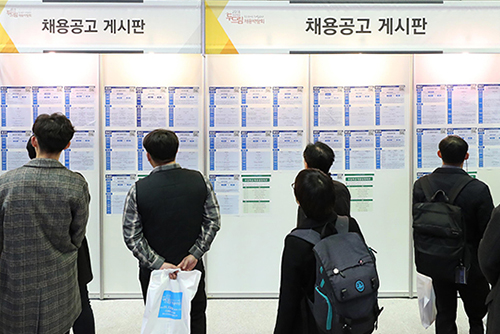 South Korea's unemployment rate rose to a nine-year high and the number of people without a job hit a 19-year high in January due to sluggish employment in the manufacturing sector.

According to Statistics Korea on Wednesday, the number of employed people last month stood at 26-point-23 million, a 19-thousand increase from a year earlier.

The monthly job growth is the lowest in five months since August of last year when a mere three-thousand jobs were created. This is significantly slow growth given that the government is aiming to create 150-thousand jobs this year.

The unemployment rate stood at four-point-five percent last month, up point-eight percentage point from a year earlier. It's the highest unemployment rate for the month of January since 2010 when the nation was reeling from the global financial crisis.

The total number of unemployed people came out to one-point-22 million last month, up by 204-thousand since the same period last year. This marks the largest January unemployment figure since 2000.
Share
Print
List