Command Ship of US 7th Fleet to Visit Busan 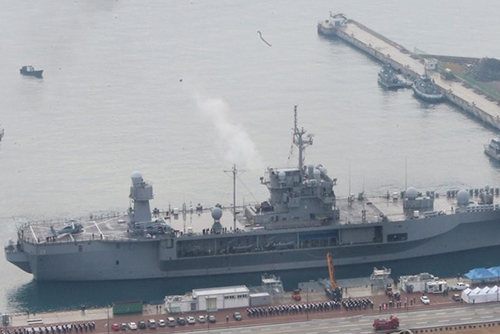 The command ship of the U.S. Navy's 7th Fleet will visit the port city of Busan to enhance the friendly ties between South Korean and U.S. forces.

South Korea's Navy said the 19-thousand-600-ton USS Blue Ridge, based in Yokosuka, Japan, will arrive in the port on Friday to support exchanges between the naval forces of the two nations.

Following months of maintenance work, the Blue Ridge is on a regional tour of countries including South Korea and Japan and is expected to stay in Korea until early next week.

A South Korean military official said that there will be no combined South Korea-U.S. maritime exercises with the ship, adding that the ship's crew members may meet South Korean troops and participate in a community volunteer service program and other events aimed at deepening ties between the allies.
Share
Print
List