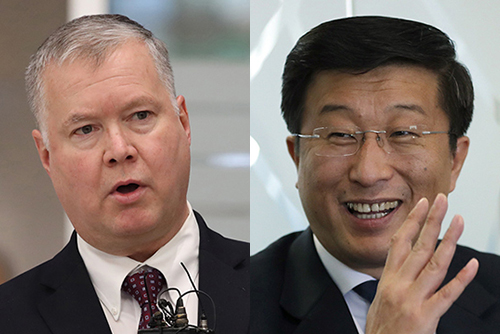 Kyodo News reports Washington has floated to Pyongyang the idea of adopting a nonaggression or peace declaration act as they prepare for summit talks in Vietnam later this month.

The Japanese news agency on Friday quoted a number of U.S. and Japanese government sources familiar with the matter.

The sources said Washington made the proposal in order to entice North Korea into making concessions related to denuclearization by guaranteeing the security of the North Korean regime.

However, the report said it is uncertain whether an agreement will be reached before the second U.S.-North Korea summit, given Pyongyang’s continued reluctance to declare its nuclear weapons and missile programs.

The report said the U.S. initially sought to declare an official end to the Korean War but decided against the idea after assessing that it would be difficult to get support on the matter from relevant countries, including South Korea and China, in a short period of time.
Share
Print
List