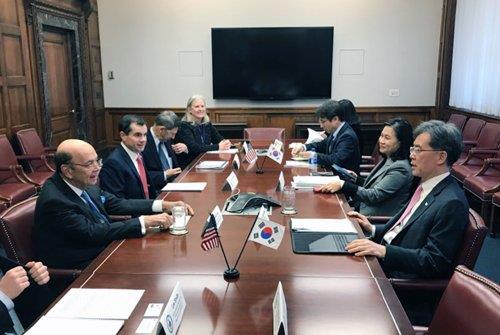 Following foreign media reports on the U.S. Commerce Department’s recommendation that auto imports could pose a "national security threat" to the United States, the South Korean government says it is keeping a close eye on the situation.

An official at the Foreign Ministry in Seoul said Friday that while high-ranking U.S. officials have taken note of South Korea's efforts to revise its free trade deal with the U.S., a decision on exempting South Korean auto imports from tariffs remains uncertain.

The official said Seoul plans to continue delivering its request for tariff exemption to Washington until U.S. President Donald Trump makes a decision.

Trump has 90 days after receiving the report to decide whether to impose the tariffs.

The AFP reported on Thursday that the report, which is an outcome of an investigation into laws that restrict imports for national security reasons, is expected to be delivered to the White House by Sunday.

It said the report has set the stage for the Trump administration to impose heavy duties on auto imports, mostly likely from Europe.
Share
Print
List