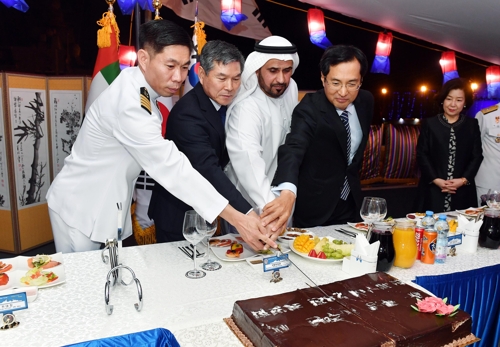 The Ahk unit in the United Arab Emirates(UAE) helps to train special forces and conduct joint military drills while the Cheonghae anti-piracy naval unit operates in the Gulf of Aden.

Key military officials from the UAE including Under-Secretary of the Ministry of Defence Matar Salim Ali Al Dhaheri accompanied Minister Jeong's visit to the units.

The Cheonghae unit on board the Choe Yeong destroyer is currently anchored at Zayed Port in Abu Dhabi to take part in the International Defence Exhibition & Conference(IDEX).

On board the warship, Minister Jeong hosted a reception to mark the tenth year since the unit's dispatch.

Some 150 guests attended the event including UAE officials, Korean residents, Seoul's ambassador to the UAE and foreign naval officials from countries including France and Italy, who are also to attend the conference.

A video screening during the event outlined the Cheonghae unit's activities over the past decade dedicated to protecting people's lives and assets including the 2011 Operation Dawn where it rescued Korean hostages held by Somali pirates.
Share
Print
List