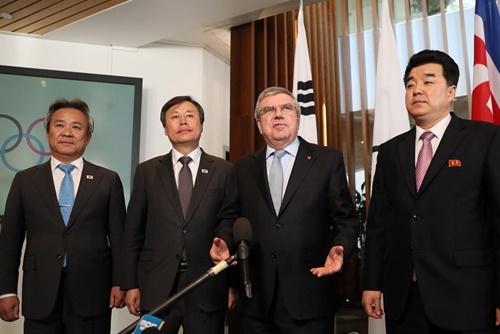 Anchor: The two Koreas have launched a campaign to host the 2032 Summer Olympics together in Seoul and Pyongyang. At a meeting with IOC chief Thomas Bach in Lausanne, Switzerland, the two sides’ sports ministers also agreed to field unified teams in four events at the 2020 Summer Olympics in Tokyo. KBS was in Lausanne to hear from the sports chiefs and the IOC president.
Kim Bum-soo has more.

Report: South and North Korea will field unified teams in four sports at the 2020 Summer Olympics in Tokyo.

The two Koreas will compete as one team in women's basketball, women's field hockey, rowing and judo at the Tokyo Games.

After reaching the decision, Bach hoped for more sports unity between the two Koreas.

[Sound bite: Thomas Bach - International Olympic Committee(IOC) President]
"It is a great day for the Olympic movement. We are looking forward now to the further consultation with two Koreas."

During the meeting, the two Korea's also formally expressed their intent to host the 2032 Summer Olympics.

[Sound bite: Do Jong-hwan - Minister of the Ministry of Culture, Sports and Tourism (Korean)]
"Chairman Bach said it was a historic proposal, and that the IOC will help as much as it can... "

[Sound bite: Kim Il Guk - N. Korean Minister of Physical Culture and Sports(Korean)]
"I felt that sport has a certain great power and it can contribute to world peace and unity... "

The two countries have been pursuing jointly hosting the Summer Olympics since agreeing on it during last September's inter-Korean summit.

Earlier this week, the Korea Sports and Olympic Committee picked Seoul as the candidate city for the joint bid, while the North picked its own capital Pyongyang.

Along with the two Koreas, China, Germany and Australia are competing to host the 2032 Summer Games.