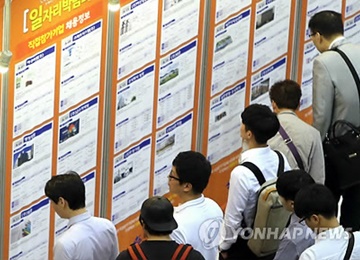 The number of long-term unemployed people in South Korea marked the largest growth in 19 years in January.

According to data by Statistics Korea on Sunday, people who have been searching for a job for over six months came to 155-thousand last month, up eight thousand from a year earlier.

That is the largest January figure in 19 years since 2000 when the number marked 167-thousand.

The number of discouraged jobseekers who are neither in work nor seeking employment came to 605-thousand last month, the largest January figure since 2014.

The number of unemployed people who have been seeking jobs for less than three months also soared by 173-thousand on-year to 776-thousand last month.
Share
Print
List