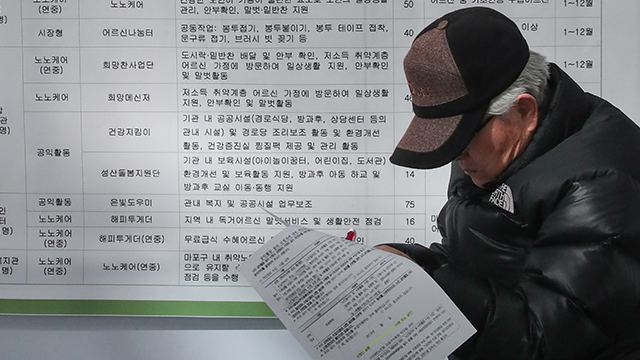 The government will provide 535-thousand temporary jobs for elderly people in the first quarter.

The Finance Ministry and the Ministry of Employment and Labor said on Sunday that the government will spend three-point-eight trillion won to provide temporary jobs for 960-thousand people this year.

Under the public employment project, 613-thousand jobs or some 822 trillion won of budget are allocated for elderly people. Eighty-seven percent or 535-thousand of the jobs will be provided in the first quarter.

The government plans to provide similar temporary jobs for women, people with disabilities and aged between 50 and 64 as well.

The budget for the government-funded jobs increased by 18 percent from a year ago, increasing the number of beneficiaries by 130-thousand.
Share
Print
List