Moon Seeks to Mediate between Trump and Kim Jong-un 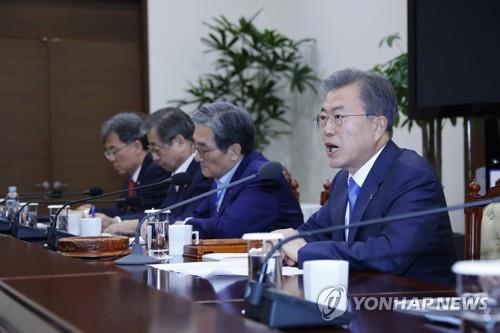 Anchor: South Korean President Moon Jae-in is seeking to mediate between U.S. President Donald Trump and North Korean leader Kim Jong-un. Moon held a meeting with the National Security Council at the presidential office compound, discussing ways to bridge the gap between the two leaders after their much-anticipated summit in Hanoi collapsed without an agreement.
Kim Bum-soo has more.

Report: The South Korean president is trying to reduce the gap between Washington and Pyongyang in the wake of the collapse of their nuclear summit last week.

[Sound bite: President Moon Jae-in (Korean)]
"We hope the two leaders will meet in the near future and reach an agreement that was delayed... In that process, our role has again become important."
"We believe that the North Korea-U.S. talks will eventually work out but do not want a long stalemate."

[Sound bite: President Moon Jae-in (Korean)]
"The dismantlement of the Yongbyon nuclear facility, which is the foundation of the North Korean nuclear development, is now within a visible range along with the U.S. inspection and verification. If the plutonium reprocessing and uranium enrichment facilities of Yongbyon are completely dismantled, the North Korean denuclearization will enter into an irrevirsible phase."

Despite his positive take, the second Trump-Kim talks were disappointing for the South Korean president, who had hoped the meeting would serve as a turning point for denuclearization and lead to permanent peace on the Korean Peninsula.

Moon told Trump a week before the summit that South Korea can work with the U.S. in offering corresponding measures to North Korea's denuclearization steps. Moon made reference to the pending inter-Korean project of linking severed inter-Korean roads and railways as possible reward measures for the North.
Kim Bum-soo, KBS World Radio News.
Share
Print
List