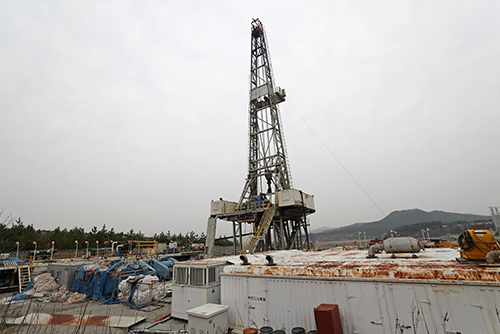 The government says it will permanently suspend a geothermal power plant in Pohang which a research team cited as the cause of the powerful earthquake that rattled Pohang back in 2017.

The Ministry of Trade, Industry and Energy said in a statement on Wednesday that it humbly accepts the research team’s assessment and expressed deep regret to the citizens of Pohang who had been hit by the quake.

Earlier in the day, the research team, comprised of experts from both home and abroad, announced in a news conference that the Pohang quake resulted from the nearby geothermal power plant injecting water into the ground.

The ministry said that it will restore the site where the power plant is located after consulting with experts on ways to safely conduct restoration efforts.

The ministry will also carry out a thorough inspection in the process of pursuing its project to commercialize geothermal power plants and to select suitable sites to house such plants.

In addition, the ministry disclosed that starting from this year, it will spend nearly 226 billion won for the next five years to repair houses and infrastructure in Pohang's Heunghae town, which suffered the biggest blow from the 2017 quake.
Share
Print
List