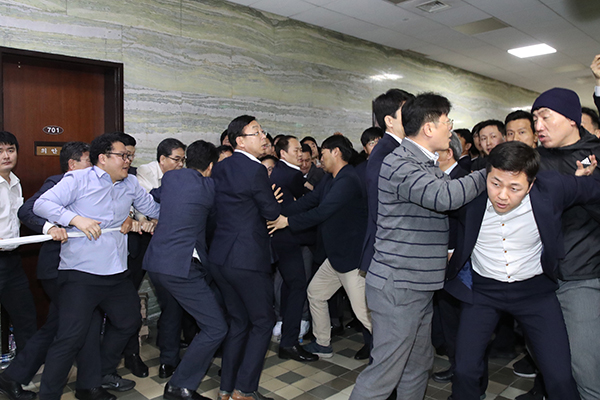 The parliamentary standoff between the main opposition Liberty Korea Party(LKP) and the ruling and minor opposition parties is continuing over fast-tracking legislation regarding electoral reform and the creation of a body to investigate high-ranking government officials.

The ruling Democratic Party(DP) declared on Friday that it will complete the procedure to fast-track the controversial bills, while the LKP vowed to deter it by all means.

At a supreme council meeting held at the National Assembly, DP Chairman Lee Hae-chan said that all lawmakers and members of his party will do their best to set up a new legal order by passing the bills.

The party is planning to convene special parliamentary committees for political and judiciary reform later in the day to complete the fast-track procedure.

The DP and three opposition parties, except the LKP, had agreed to fast-track the bills by Thursday, but the main opposition has been deterring them by occupying the venues where the meetings were scheduled to be held.

The DP said that the LKP lawmakers and members who hinder the meeting will be charged.

LKP floor leader Na Kyung-won claimed the electoral reform bill, which seeks to increase the number of proportional representation seats while reducing the number of district seats, is designed to help the current regime and vowed that her party will deter the plan by taking any measure necessary.
Share
Print
List