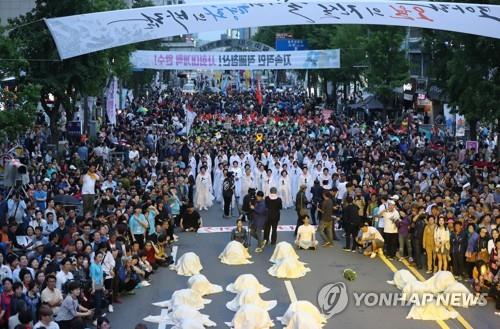 Leaders of the ruling and opposition parties, except for the conservative main opposition Liberty Korea Party(LKP), are gathering in Gwangju to commemorate the 39th anniversary of a pro-democracy uprising.

The ruling Democratic Party chairman, Lee Hae-chan, as well as the minor opposition Bareunmirae Party chief Sohn Hak-kyu, Justice Party leader Lee Jeong-mi, and Chung Dong-young, chairman of the Party for Democracy and Peace, are scheduled to attend a ceremony on the eve of the May 18th Gwangju Democratization Movement at the southwestern city on Thursday.

Hundreds of citizens were killed and many more injured during a ruthless crackdown of the pro-democracy uprising on May 18, 1980, in which thousands of Gwangju citizens rose up against the military junta led by Chun Doo-hwan, who seized power in an internal coup.

The leaders and lawmakers of the four parties will attend the ceremony to pay tribute to the spirits of the victims.

Lawmakers of the three minor opposition parties will also join a parade for democracy and peace before the ceremony.

Meanwhile, leaders of the LKP, including Chairman Hwang Kyo-ahn and floor leader Na Kyung-won, will be in Daejeon on Friday, staging a rally condemning the Moon Jae-in administration. Hwang plans to attend a ceremony commemorating the uprising in Gwangju on Saturday.
Share
Print
List