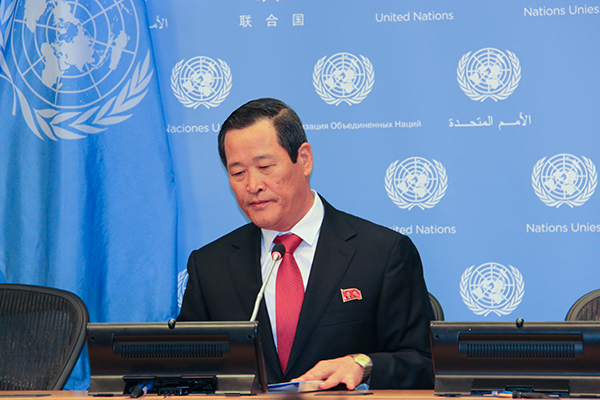 Anchor: North Korea's ambassador to the UN condemned the U.S.' recent seizure of a North Korean cargo ship, which is accused of violating sanctions on the regime. Kim Song, the North's permanent representative at the UN, urged the U.S. to return the ship on Tuesday in a rare news conference at the UN headquarters in New York. Washington, meanwhile, remains adamant about maintaining sanctions on Pyongyang.
Kim Bum-soo has more.

During his news conference at the UN headquarters on Tuesday, North Korean Ambassador Kim Song urged the U.S. to return the vessel.

[Sound bite: N. Korean Ambassador to the UN Kim Song (English)]
"We are condemning in strongest terms this act of dispossessing of our cargo ship."

Shortly after North Korea's launch of short-range missiles on May 9th, the U.S. Justice Department announced it had impounded the "Wise Honest." The North's second largest cargo ship had already been detained by Indonesia since April of last year for transporting coal to China, Russia and other countries in violation of international sanctions.

[Sound bite: N. Korean Ambassador to the UN Kim Song (English)]
"The latest act of the United States constitutes an extension of the American miscalculation for putting pressure upon to us to kneel down by means of the maximum pressure. Also it is outright denier of the underlying spirit of June 12 DPRK-USA joint statement which committedly establishing new bilateral relations. Therefore the United States should deliberate and think over the consequence of its outrageous acts might have on the future developments. Also the United States must return our cargo ship without delay."

However, Washington is not budging from its position. In response to media inquiries regarding Kim's argument, the U.S. State Department reaffirmed that the sanctions against North Korea will remain thoroughly in place by the UN Security Council members.