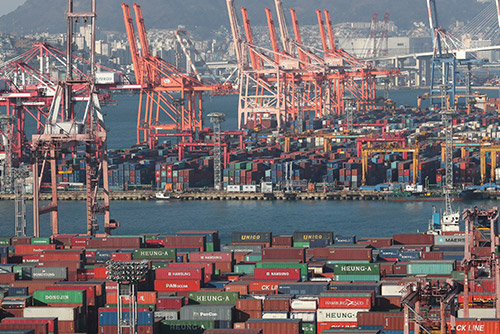 Anchor: The Korea Development Institute has marked down its economic growth outlook for this year to two-point-four percent, saying that growth in domestic demand is slowing down amid a continuous decline in exports. This came in the wake of the recent OECD report, which also slashed the rate to two-point-four.
Our Bae Joo-yon has more.

Report: The Korea Development Institute(KDI) announced on Wednesday that it expects the nation’s economy to post growth of two-point-four percent this year, which is down point-two percentage points from its forecast issued last November.

The KDI’s forecast came a day after the Organization for Economic Cooperation and Development also downgraded its 2019 growth outlook for South Korea from two-point-six percent to two-point-four percent.

The think tank said the nation’s economy is facing a contraction in investment and slowing growth in domestic demand on top of a decline in exports.

KDI researcher Jung Kyu-chul said the drop in exports has worsened this year after outbound shipments of semiconductors began to slide from the latter half of 2018.

[Sound bite: Jung Kyu-chul, researcher at KDI (Korean)]
“The decline in exports are worsening after exports of semiconductors began to see a drop from the second half of last year amid a slowdown in global economic growth. It is expected to be difficult for exports to see a quick recovery given that the global economy’s growth is slowing down amid uncertainties surrounding the U.S-China trade dispute.”

The institute said the slump in global economic growth is hampering the recovery of South Korea’s exports.

In particular, the institute noted that with growing uncertainties abroad, including the U.S.-China trade dispute, it could further slash the growth outlook by up to point-two percentage points.

[Sound bite: Kim Hyun-wook, head of KDI’s economic forecast office (Korean)]
“Though there are significant factors that could affect South Korea’s economy, the trade dispute between the U.S. and China is inevitably a key risk factor that could push down economic growth outlooks for South Korea, not only for this year but also in the future.”

The institute said side effects resulting from changes in labor policies, including minimum wage hikes, could further push down the growth rate while policies expanding social safety nets including basic pensions could improve economic conditions.

The KDI also mentioned the need to cut the nation’s key interest rate, stressing that expansionary monetary policy is needed to respond to the contraction in demand both at home and abroad.

The institute, however, had brighter prospects for next year, projecting that the nation is expected to see growth of around two-and-a-half percent on the back of a recovery in exports.
Bae Joo-yon, KBS World Radio News.
Share
Print
List