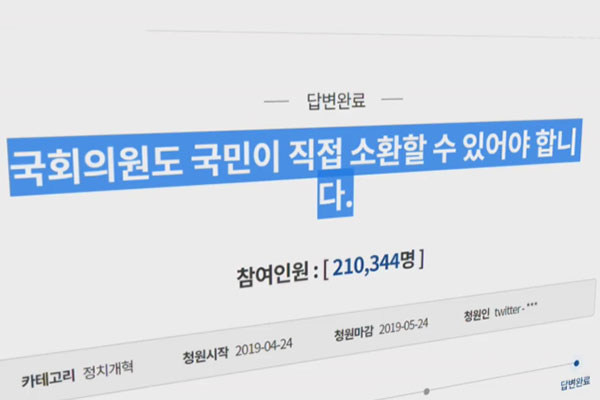 The presidential office on Wednesday appeared to criticize the main opposition Liberty Korea Party(LKP) over a prolonged parliamentary impasse in response to an online petition on its website.

Presidential secretary for political affairs Bok Ki-wang issued the top office's position regarding an online petition which called for a recall election in which voters can remove a lawmaker through a direct vote before that lawmaker's term ends.

The presidential secretary said that it's "hard to understand" why lawmakers cannot be subject to a recall vote, unlike presidents and local government chiefs.

Bok said that the voters have no means to check and control their representatives even if they do not work. This was an apparent criticism of the LKP, which has refused to return to parliament, putting several pending bills on hold.

On Tuesday, the top office revealed a similar stance in response to an online petition calling for the dissolution of the LKP and the ruling Democratic Party.

LKP floor leader Na Kyung-won said on Thursday that parliament cannot be normalized when the presidential office ridicules and pressures the opposition.