S. Koreans to Take to the Streets to Enjoy U-20 World Cup Final 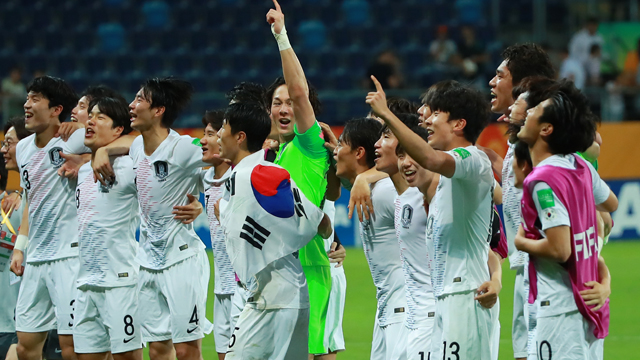 Anchor: Outdoor cheering events will be held across South Korea this weekend as the young Taegeuk Warriors are set to take on Ukraine in the FIFA U-20 World Cup championship. Team Korea looks to clinch the nation’s first-ever title in any men’s tournament under the FIFA banner.
Our Moon Gwang-lip has this report.

Report: People in Seoul are expected to take to the streets over the weekend to cheer on the South Korean under-20 men's football team as it looks to secure its first-ever FIFA U-20 World Cup championship.

The final between South Korea and Ukraine will begin in Lodz, Poland at 1 a.m. Sunday Korea time.

Several districts in the capital city are organizing spectator events. Seocho District in southern Seoul said on Friday that it will host a street cheering event right outside Gangnam subway station from 10 p.m. on Saturday.

Participants can follow the game live, as a large screen will be set up at the event.

Millions of Koreans joined public celebrations and viewing parties on the streets of Seoul and other cities in 2002 when South Korea reached the semifinals of the World Cup it hosted with Japan.

Similar scenes, albeit on a smaller scale, may be reenacted this weekend.

The South Korea U-20 men’s football team is historically not as popular as the full-fledged national team, but with the spectacular success achieved so far this year, the team has dominated headlines and generated massive attention.

The team beat Ecuador 1-0 in the semifinals earlier this week, and are one win away from becoming the first-ever men’s national team from Korea to win a FIFA championship.

Team Korea is 5-1 overall in the tournament, and has knocked off challenging opponents such as Argentina, Senegal and Japan.
Moon Gwang-lip, KBS World Radio News.
Share
Print
List