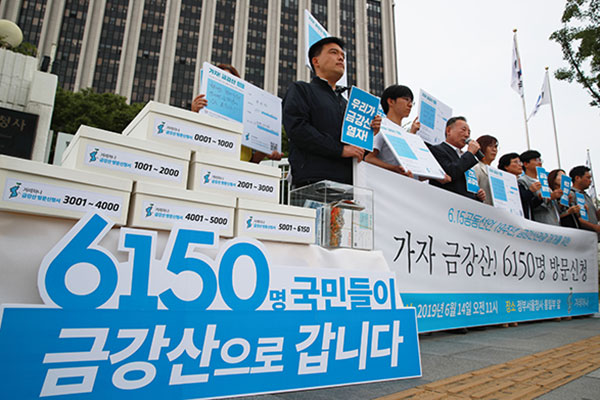 Thousands of South Koreans have submitted a letter of intent to visit Mount Geumgang, calling for the swift resumption of the suspended tourist program to the North Korean mountain.

Seoul-based civic group, Movement for One Korea, held a press conference on Friday in front of the government complex in Seoul before delivering letters of application it collected from six-thousand-150 people across the country to the Unification Ministry.

The group said that the scenic mountain in the North's east coast is a symbol of inter-Korean exchange and peace on the Korean Peninsula and that restarting the joint tourist program will be the first step for implementing the joint declarations of the inter-Korean summits. It then urged the South Korean government to make a decision to help resume the project.

The civic group’s move comes five days ahead of the 19th anniversary of the first-ever summit between South and North Korea.
Share
Print
List