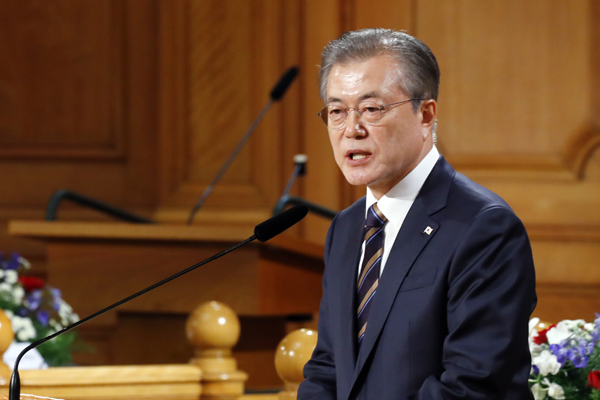 Anchor: President Moon Jae-in delivered a speech at the Swedish parliament on Friday. He outlined his vision for peace on the Korean Peninsula, urging North Korean leader Kim Jong-un to trust the international community and step closer to denuclearization.
Kim Bum-soo has more.

President Moon Jae-in laid out his vision for peace on the Korean Peninsula, reminding North Korea of Sweden's decision to give up its nuclear program in the 1960s.

[Sound bite: President Moon Jae-in (Korean)]
“Sweden was able to give up its nuclear [program] before any other nation because it had faith in humanity and its ability to create a new future. It was faith that the world would eventually choose 'prosperity through peace.' I believe in Sweden’s path. The Korean Peninsula must also build peace through trust, and further solidify trust through peace.”

Speaking at the Swedish parliament on Friday, the South Korean president said peace can only be achieved through dialogue.

[Sound bite: President Moon Jae-in (Korean)]
“It is not nuclear weapons but dialogue that keeps North Korea’s peace…  Each regime must be respected and guaranteed. That’s the first step for peace and also an immutable premise. If North Korea walks on the path for dialogue, no one in the world will threaten North Korea’s regime and security.”

Moon called on the North to display its willingness for denuclearization to the international community and continue bilateral and multilateral dialogue.

He stressed that denuclearization will lead to an establishment of a joint economic community of the two Koreas and realize the economic potential of Asia.

[Sound bite: President Moon Jae-in (Korean)]
"If North Korea is freed from international sanctions and the two Koreas are reborn as an economic community, the Korean Peninsula will promote peace for Northeast Asia and become a fount of the potential of Asia. The South and North can prosper together. Complete denuclearization and peace on the Korean Peninsula will become solid ground for global nonproliferation and an example of a successful resolution to an international military dispute. The South and the North will go beyond achieving peace on the peninsula and contribute to world peace."

During their first meeting a year ago in Singapore, the two leaders agreed to jointly pursue denuclearization, but failed to make further progress after their second meeting in Hanoi collapsed in February.