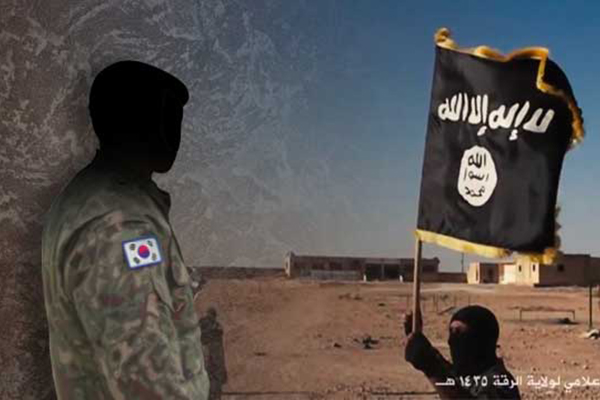 Anchor: The government has confirmed a South Korean soldier is under investigation for trying to join the Islamic State terrorist group and preparing a terrorist attack in South Korea. If the allegations turn out to be true, it could be the first known case of a so-called "lone wolf" terrorist attempting an attack on the peninsula in cooperation with an international terror group.
Celina Yoon has more.

Report: The military and police are looking into a former Army soldier on suspicions of attempting a terrorist attack, possibly with intentions to join the Islamic State, or ISIS.

According to the Defense Ministry Friday, a joint investigation with support from the U.S. FBI led to them to the man identified by his last name Park last month.

When authorities first detected the alleged illegal activities, the 23-year-old was an active duty serviceman at an Army unit in the Seoul metropolitan area, working as an explosives specialist.

Park is said to have been first exposed to ISIS through its Amaq media network, which he accessed from a South Korean IP address. While a clandestine ISIS app was also found on his smartphone, he is suspected to have uploaded ISIS-related material online in efforts to help promote the militant group.

The ex-Army sergeant had allegedly received an email from an ISIS member explaining how to join the terrorist group.

Moreover, during his service, Park was once caught stealing a detonator and other devices during training.

The suspect is denying any criminal intentions, saying he only acted out of curiosity.

If Park is convicted, it would mark the first known case of a home-grown “lone wolf,” or isolated terrorist, preparing an attack with connection to an international terrorist group.
Celina Yoon, KBS World Radio News.
Share
Print
List