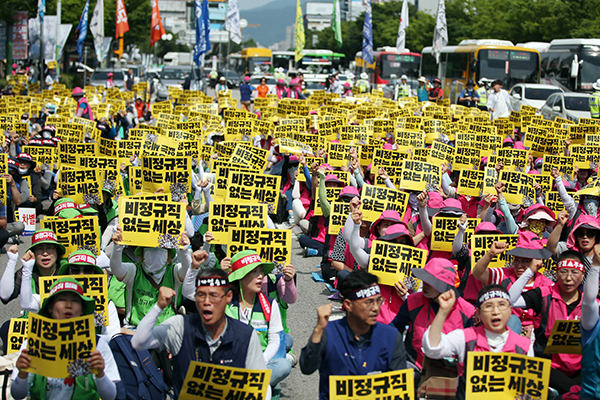 An alliance of non-regular public employees affiliated with the Korean Confederation of Trade Unions ended their three-day general strike on Friday and plan to return to work next week.

The alliance, mostly made up of school workers, said it decided to have faith in a pledge made by education authorities to work towards improving their working conditions during negotiations slated to start on Tuesday.

The alliance is calling for wage hikes, no discrimination and the switching of their status to regular workers.

Earlier on Friday, the Education Ministry said nearly 13-thousand-300 non-regular workers at more than ten-thousand-500 public schools were taking part in the last day of the strike.

Due to decreased staff numbers, some one-thousand-400 schools had to provide students with bread and milk or other substitutions instead of standard lunches, while some schools were even forced to suspend after-school programs.

The number of participants in the labor action dropped by four-thousand compared to a day prior, but the three-day total hit 52-thousand, marking a record since non-regular school workers launched their first strike in 2012.
Share
Print
List