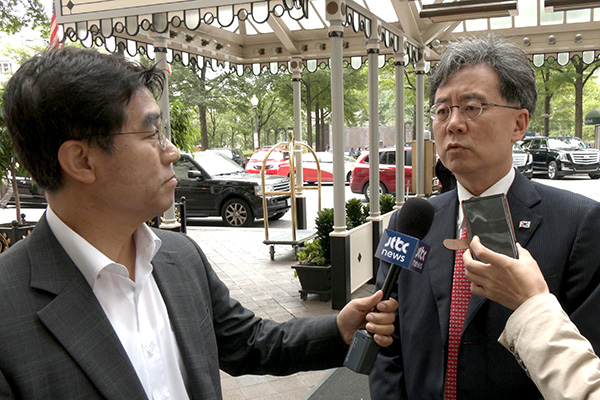 A top presidential official said that Washington has expressed openness to holding trilateral talks with Seoul and Tokyo to resolve the ongoing trade dispute between its Asian allies.

Kim Hyun-chong, deputy chief of the president's National Security Office, told reporters on Thursday outside his hotel in Washington that South Korea and the U.S. are eager to have the meeting to discuss Tokyo's recent export curbs against Seoul, but that Japan has not responded to the offer.

The top official said that U.S. officials expressed hope that Seoul and Tokyo would quickly and constructively resolve the dispute, as a prolonged row between two of its allies is not in the best interest of the U.S.

Kim, who made an unannounced visit to the U.S. on Wednesday, said he met with Acting White House Chief of Staff Mick Mulvaney as well as members of Congress to explain Seoul's position regarding Japanese trade restrictions.
Share
Print
List