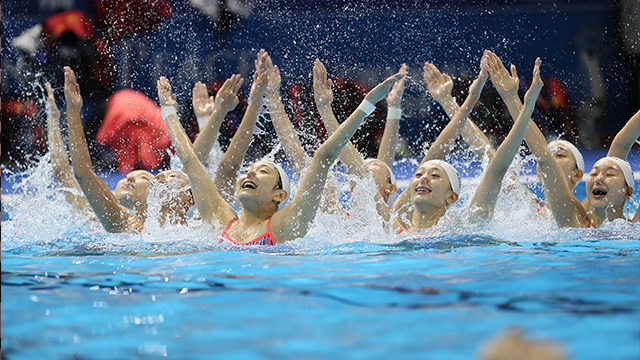 Anchor: The biennial World Aquatics Championships organized by FINA, or the International Swimming Federation, splashed in to action Friday in South Korea. The world's top athletes in aquatics sports will compete for medals until July 28.
Choi You Sun has the details.

Report: A record two-thousand-639 athletes representing 194 countries will participate in the 2019 World Aquatics Championships in South Korea's southwestern cities of Gwangju and Yeosu.

The biennial championships run by FINA is considered a major international sporting event and it's the first time it's taking place in South Korea.

Over the next 17 days, the world's best athletes in the aquatics disciplines of swimming, diving, high diving, open water swimming, artistic swimming and water polo will compete for top prizes and to break new records.

The first medals will be awarded in three disciplines on Saturday, including the men's five-kilometer open water swimming event starting at 8:00 a.m. at the Yeosu EXPO complex.

Host South Korea will compete in the discipline for the first time, and will be represented by Baek Seung-ho and Cho Jae-hoo, who finished first and second, respectively, in the nation's first open water national team trials last month.

Three diving finals and one artistic swimming final are also scheduled for Saturday, while conventional swimming competition fans will have to wait until late next week to see their favorite athletes in action.

South Korea's Kim Seo-yeong, who placed sixth in the women's 200 and 400-meter events two years ago, is hoping to bring home the nation's first medal in women's swimming.

Meanwhile, the so-called "Dream Team" from the U.S. consisting of 18 Olympic champions, including 2017 FINA MVP Caeleb Dressel, will look to live up to expectations, while China's Sun Yang will vie for a fourth consecutive gold in the men's 400-meter freestyle.
Choi You Sun, KBS World Radio News.
Share
Print
List