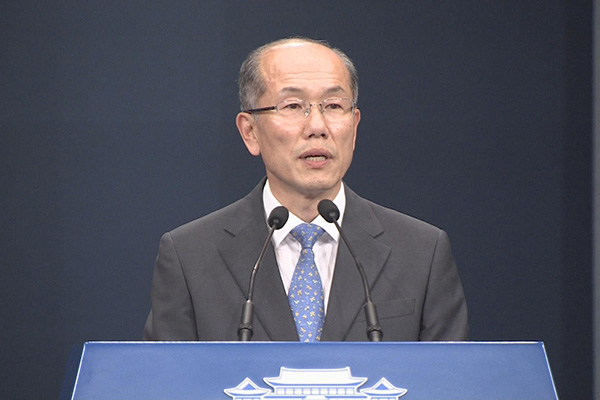 South Korea's National Security Council(NSC) has proposed an impartial investigation be carried out by the international community to determine the veracity of Tokyo's insinuation that Seoul may have violated North Korea sanctions.

The remarks came during a Friday briefing from Kim You-geun, secretariat of the NSC and deputy chief of the president's security office, who called for an end to unnecessary disputes.

He proposed that the UN Security Council expert panel or some other appropriate international organization investigate whether South Korea or Japan violated sanctions against North Korea in order to get to the bottom of Japan's claims.

Some in Japanese Prime Minister Shinzo Abe's government have cited alleged shipment of strategic materials to the North as the reason for its export restrictions. No evidence has been offered to support these allegations.

Kim said that as a UN member, South Korea has thoroughly implemented UN resolutions on North Korea but that it would immediately apologize for and rectify any related irregularities that may arise during an investigation.

He added that if and when an investigation confirms South Korea's position, Japan must offer an apology and immediately withdraw its retaliatory export curbs.