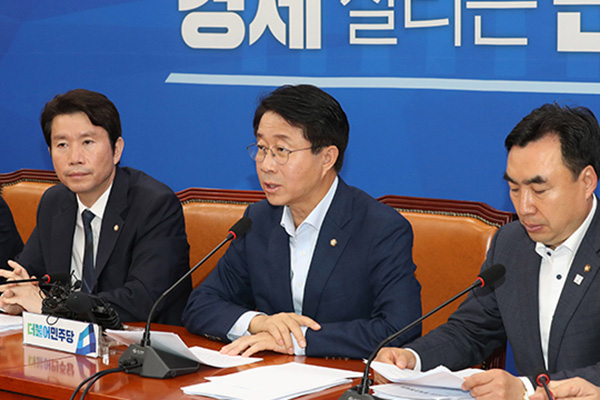 Led by Chairperson Lee Hae-chan, the party's leadership on Friday visited a small manufacturer in the semiconductor industry located some 20 kilometers south of Seoul.

In a meeting with the company, Lee said the current situation should serve as an opportunity to enhance the country’s self-reliance in certain areas and carry out industrial restructuring.

Lee then promised that the party and the government will work together to secure a one-trillion won investment for related projects, 300 billion of which will come from an augmented supplementary budget bill pending in parliament.

Representative Choo Mi-ae, who sits on a special party committee launched in response to Japan’s trade restrictions, held an emergency forum at the National Assembly on Friday and discussed possible countermeasures in various sectors.

A total of 27 DP lawmakers also proposed a joint resolution that urges Japan to rescind the export controls and describes inconsistencies between the curbs and Tokyo’s calls for free trade.
Share
Print
List