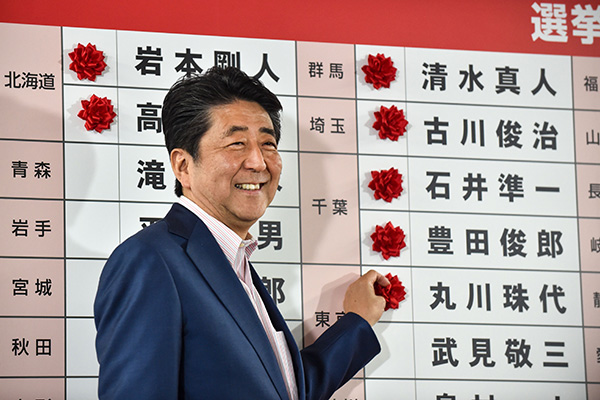 Report: Japan's ruling Liberal Democratic Party and its coalition partner Komeito won 57 and 14 seats in the Diet, respectively, out of 124 seats up for grabs during Sunday's upper house elections.

Although Prime Minister Shinzo Abe's ruling coalition secured a majority in the 245-member House of Councillors, they failed to retain the two-thirds supermajority needed for Abe to push his long-held plans for constitutional reforms.

The ruling and opposition parties, as well as the Japanese public, are divided over revising the war-renouncing Article 9, a symbol of Japan’s post-war pacifism.

On the back of winning upper house majority, meanwhile, the Abe administration is expected to further expand its trade restrictions targeting South Korea.

Appearing on Asahi TV during its election coverage on Sunday, Abe said constructive discussions between Seoul and Tokyo would be possible only when Seoul brings an "appropriate response to its breach" of a 1965 treaty that normalized bilateral ties.

Tokyo has been challenging the validity of the South Korean Supreme Court's rulings last year that ordered Japanese firms to compensate Korean victims of Japan's wartime forced labor, claiming that all reparation issues were settled with the 1965 treaty.

Abe has denied the export curbs enforced earlier this month on smartphone and display materials to South Korea were in retaliation to the forced labor issue, claiming instead they are trade measures linked to national security.

South Korea's presidential office denounced Abe's latest remarks on Monday, urging Tokyo not to cross the line but make efforts toward future bilateral cooperation for the good of the people in both countries.