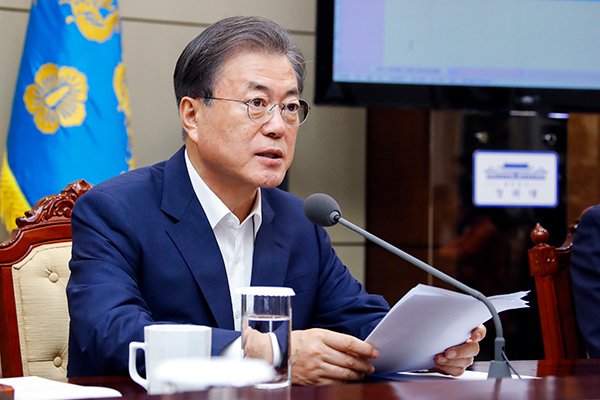 During a weekly meeting with key aides at the top office on Monday, Moon addressed the need to boost Korea's manufacturing edge against Japan amid the ongoing trade row with the neighboring state.

While noting that Seoul has again recognized the necessity of securing manufacturing competitiveness, Moon stressed that South Korea has so far surpassed absolute advantages held by Japanese consumer electronics, semiconductors, shipbuilding and others.

The president said the government will redouble its support for globally competitive startups in a long-term response to Japanese trade retaliation.

While promising bold support for innovation in the high-tech component manufacturing sector, Moon said challenges caused by Japan's export controls against South Korean tech firms will serve as an opportunity for them to grow stronger.
Share
Print
List