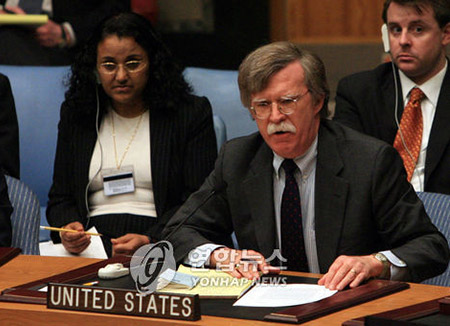 Kyodo News reported that after meeting with Foreign Minister Taro Kono, Bolton said they had “very productive” discussions covering every issue related to national security, but did not elaborate further.

Kyodo speculated that tensions between Japan and South Korea over Japan’s wartime forced labor was likely to have been among the topics that were addressed along with Japan’s possible participation in a U.S.-proposed coalition against Iran near the Strait of Hormuz.

Tokyo has been citing national security concerns as the grounds for its recent trade restrictions on South Korea, but Seoul suspects it is a retaliatory measure in response to South Korean top court decisions against several Japanese firms implicated in Japan’s wartime forced labor.

Bolton was also known to have reaffirmed to Kono the importance of trilateral cooperation among Seoul, Washington and Tokyo to realize the denuclearization of North Korea.

Bolton is scheduled to fly to South Korea on Tuesday for a series of meeting with South Korean officials.
Share
Print
List