S. Korea Urges Japan to Act with 'Prudence' on Export Curbs Ahead of WTO Meeting 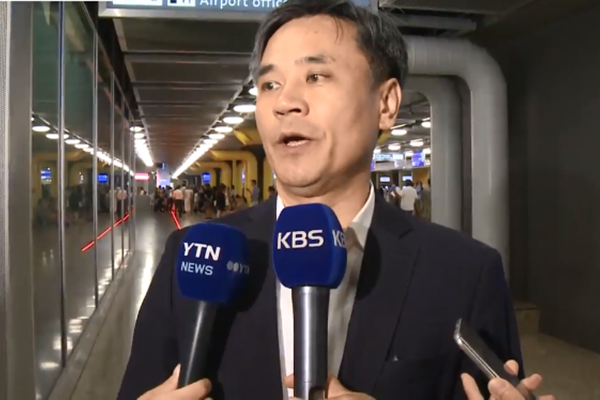 Anchor: South Korea and Japan are lobbying the international community to support their side in an intensifying trade row between the two Asian neighbors. Senior South Korean officials have been dispatched to Washington and Geneva, seeking "prudence" from Tokyo, while Japan sought to relay its views at a briefing session with foreign diplomatic staff.
Choi You Sun reports.

Kim will attend a meeting of the World Trade Organization(WTO) General Council in Geneva from Tuesday to Wednesday and highlight Seoul’s position that Japan’s moves violate WTO regulations.

Seoul will seek support from the international community in efforts to convince Tokyo to retract the export restrictions on three high-tech materials to South Korea used in the production of semiconductor and display materials.

Industry experts project sustained curbs would be detrimental not only to South Korea and Japan but to global supply chains as well.

Speaking to reporters on Monday, Kim emphasized the view that Japan's anticipated move to remove South Korea from a shortlist of countries that enjoy streamlined trade relations with Tokyo would be a further breach of international trade rules.

The senior official, who played a key role in securing a WTO ruling in favor of South Korean import restrictions on Japanese fisheries products following the Fukushima Daiichi nuclear disaster in 2011, said Seoul will review filing a complaint with the WTO following the council meeting.

In a related development, South Korea's Trade Minister Yoo Myung-hee departed for the U.S. on Tuesday to lobby for support for South Korea from Washington amid the deepening trade feud with Japan.

During her five-day trip, Yoo plans to meet with U.S. officials, lawmakers and industry representatives and present Seoul’s projections of the damage Japan’s export curbs will cause to the U.S. and global economies.

Meanwhile, Japan has launched a counteroffensive, arguing that its trade curbs are valid and legal.

According to various Japanese media outlets, the Japanese foreign and trade ministries held a briefing session on Monday for foreign diplomatic staff in Japan in order to relay Tokyo's position on the export restrictions.

During the one-hour session, Tokyo reportedly claimed the measures were part of a normal review of its export management system and denied they were influenced in any way by South Korean Supreme Court rulings in favor of victims of Japan's wartime forced labor.
Choi You Sun, KBS World Radio News.
Share
Print
List