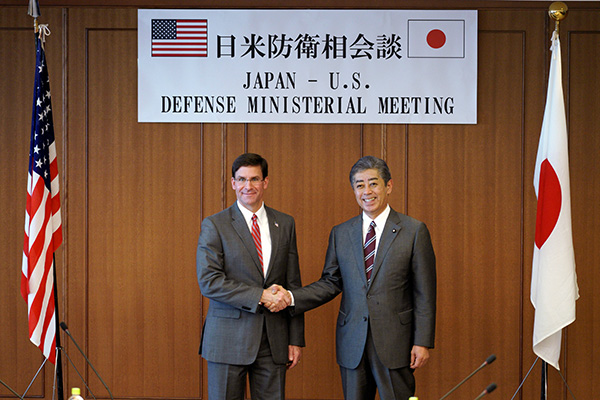 Japan’s defense chief says he expects his South Korean and American counterparts to reaffirm the importance of trilateral cooperation on regional security matters when they meet this week.

Iwaya said Esper told him during their meeting Wednesday that security cooperation between Seoul and Tokyo is important and urged him to build strong relations with South Korean Defense Minister Jeong Kyeong-doo.

The Japanese minister said he asked Esper to deliver his intent to Seoul, adding he thinks the new U.S. defense chief will work hard for stable trilateral cooperation.

His remarks come as Seoul mulls withdrawing from a military intelligence-sharing agreement with Japan in response to Tokyo’s trade restrictions.

According to Kyodo News, Iwaya and Esper said they are determined to maintain the deal known as the General Security of Military Information Agreement(GSOMIA) as well as trilateral cooperation on regional security matters.
Share
Print
List