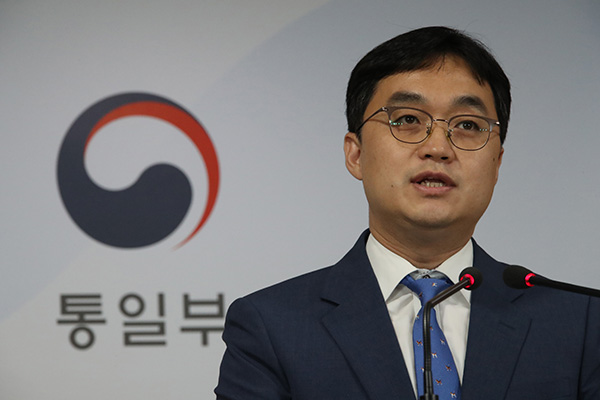 At a press briefing on Friday, Unification Ministry deputy spokesperson Kim Eun-han said such criticism does not correspond with joint declarations announced by the leaders of the two Koreas during their summit meetings last year.

Regarding the North's warning that it had no intention to resume dialogue with the South, the spokesperson said Seoul maintains its position to implement what was agreed upon between the leaders and that dialogue and cooperation are the only way to fulfill the agreements.

The spokesperson then urged Pyongyang to actively respond to Seoul's efforts toward developing inter-Korean ties and establishing peace on the Korean Peninsula.

The North's Committee for the Peaceful Reunification of the Country issued a statement on Friday, dismissing Moon's speech reaffirming his commitment to inter-Korean reconciliation and cooperation as "rhetorical and thoughtless."

It added that it would be senseless to hope talks will naturally resume following the completion of the South Korea-U.S. joint military exercise.
Share
Print
List