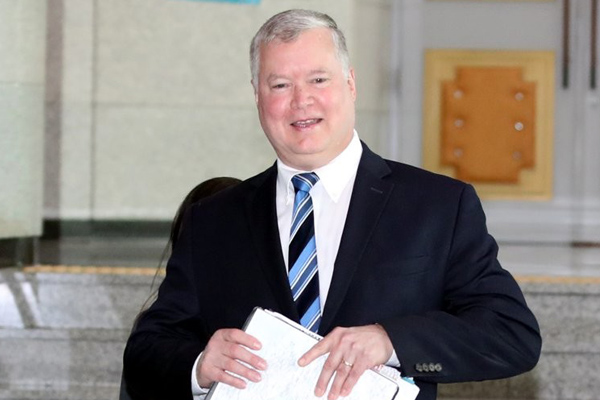 Seoul's Foreign Ministry said the two officials will discuss ways of cooperation to ensure that a swift resumption of working-level talks between the U.S. and North Korea can lead to the complete denuclearization of the Korean Peninsula and substantive progress in establishing permanent peace.

Biegun will stay in Seoul for three days until Thursday and discuss ways to resume U.S.-North Korea nuclear negotiations with Lee.

U.S. President Donald Trump and North Korean leader Kim Jong-un agreed to resume talks when they met at the inter-Korean border in late June but this has yet to take place.

Also, the day Biegun is to arrive is the last day of the South Korea-U.S. joint command post military exercise which began on August eleventh.

Pyongyang has demanded the drill to stop and has fired a series of short-range projectiles since last month.

Experts have therefore projected that working-level talks between the U.S. and the North will likely resume after the South Korea-U.S. exercise comes to an end.