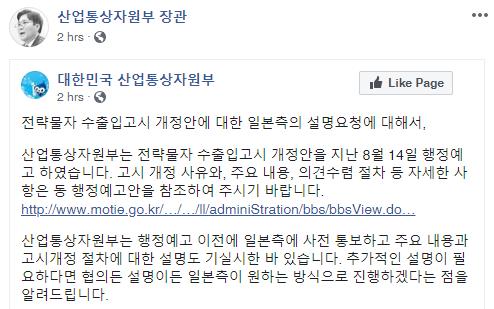 Seoul's trade minister said the government notified Japan in advance of its plan to remove Tokyo from its list of trusted trade partners.

Minister of Trade, Industry and Energy Sung Yun-mo discussed the move on Friday in a Facebook posting, adding that Seoul is willing to offer further explanation in anyway Japan wants regarding the measure.

The trade ministry on Wednesday issued an advance administrative notice on removing Japan from the trade whitelist.

The minister said in his message that before Wednesday, Seoul notified Tokyo of the changes and procedures to follow and also promised additional explanation or consultation if needed.

Another ministry official clarified that Japan's trade ministry had asked through email what are the specific reasons and grounds behind the latest changes even after Korea provided initial explanation.

Korea told Japan to closely refer to the contents of the earlier issued administrative notice and that the two sides can also meet face to face for talks.

Minister Sung had earlier said that Seoul is ready if Tokyo wants dialogue.

Japan's Minister of Economy, Trade and Industry Hiroshige Seko said Thursday that his country was requesting an explanation from Seoul on its decision to drop Japan from the whitelist but denied any plans to hold talks with Korea.
Share
Print
List