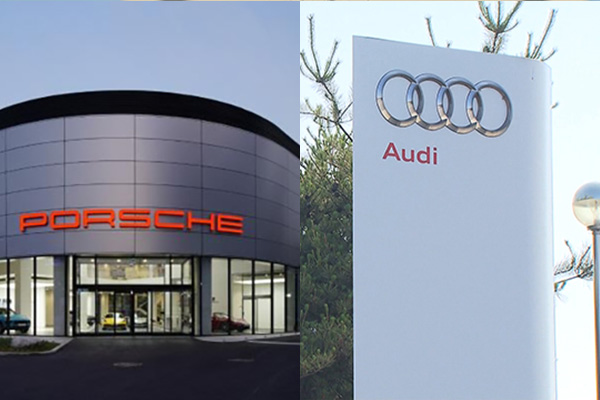 Anchor: Multiple Audi and Porsche vehicle models will have their government authentication revoked and their parent company, Volkswagen Group, will be fined after the government concluded that they manipulated their emissions levels.
Celina Yoon has more.

Report: The Environment Ministry announced Tuesday that eight diesel-powered car models imported and sold by Audi Volkswagen Korea and Porsche Korea were built to intentionally manipulate emissions levels and will have their legal authentication revoked.

The ministry will also send orders to correct the defects and will pursue criminal charges against these companies.

Some ten-thousand-261 cars sold between May 2015 and January 2018 fall under the ruling. The cars include three iterations of Audi’s A6 vehicle, two Audi A7 models, two Volkswagen Touareg models and a Porsche Cayenne model.

The ministry estimated that Audi Volkswagen Korea will face seven-point-nine billion won in fines while Porsche Korea will be levied four billion won. Both Audi and Porsche are owned by the Volkswagen Group.

The cars in question were found to have manipulated the amount of a type of chemical, called urea solution, used in their engines at high speeds to decrease nitrogen oxide emissions.

The ministry said the manipulation in these cars resulted in ten times more nitrogen oxide emissions than standard levels.

The investigation began after Germany's Federal Motor Transport Authority announced in June last year that Audi had manipulated emissions levels in some of its A6 and A7 models.

South Korean authorities confirmed these findings, and found that Volkswagen and Porsche were also manipulating their emissions levels.

The German automaker was found to have installed software that artificially reduced emissions during testing on millions of vehicles, leading to billions of U.S. dollars in fines from environmental authorities around the world.

The Environment Ministry described emissions rigging as a seriously fraudulent act, especially amid growing air pollution and rising levels of fine dust in the atmosphere. It vowed to root out any similar manipulation in the auto market.
Celina Yoon, KBS World Radio News.
Share
Print
List