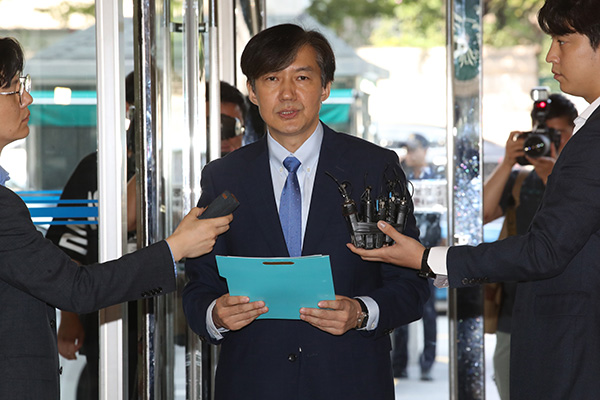 Justice Minister nominee Cho Kuk's daughter is stirring controversy after the revelation that she was listed as the primary writer of a pathology paper when she was in high school.

According to media reports, Cho's daughter joined a research team of Dankook University Medical School in Cheonan, South Chungcheong Province, for two weeks in 2008 when she was a high school sophomore.

She is the first author in a paper titled "eNOS Gene Polymorphisms in Perinatal Hypoxic-Ischemic Encephalopathy," published by the Korean Journal of Pathology in 2009.

The revelation is stirring controversy as experts in the field point out that it is very unusual for a high school student doing internship to be registered as a primary writer in a renowned journal.

Cho's daughter submitted the academic article while applying for Korea University in 2010 and got admitted. She was admitted to a medical school in 2015.

Cho's representatives preparing for his confirmation hearing said that she was highly evaluated by the professor of the research team since she actively participated in the research.
Share
Print
List