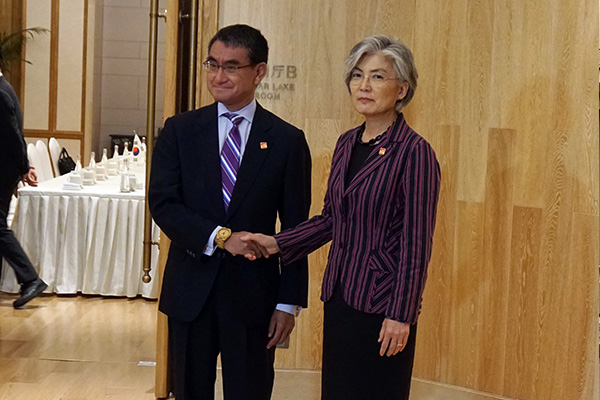 The foreign ministers of South Korea and Japan sat down on Wednesday in an attempt to ease recent conflicts between the two countries, however their meeting ended in vain.

The ministers met for 35 minutes, during which time they merely confirmed their differences.

The talks come a week before Japan's decision to remove South Korea from its "whitelist" of preferred trade partners takes effect.

It was also arranged two days ahead of the deadline for either party to express its intent not to renew a military information-sharing pact, called the General Security of Military Information Agreement(GSOMIA).

Seoul and Tokyo had reached consensus on the need to continue dialogue during a bilateral director-general level meeting on Tuesday, but remained far apart on the issues of Japan’s wartime forced labor and recent trade restrictions.

Seoul and Tokyo signed the GSOMIA in November 2016 to share information regarding North Korea and have extended it every year. The current agreement is set to expire in November.
Share
Print
List