Moon Vows Support for University R&D of Materials and Components 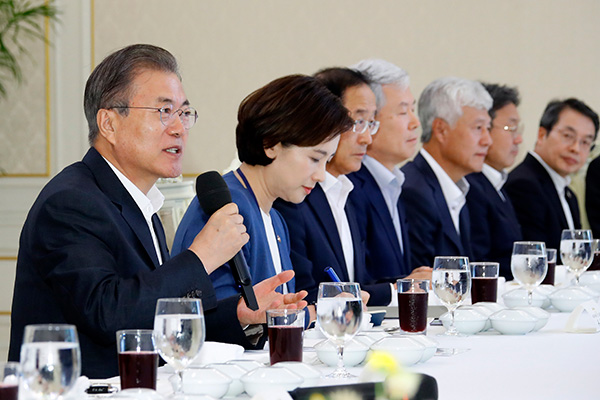 President Moon Jae-in has asked universities to take an active role in the research and development(R&D) of high-tech materials and components, pledging government support for such efforts.

At a luncheon with presidents of 24 public and private universities at the top office on Thursday, Moon said that localization of technology and support for R&D of high-tech materials and components are key priorities for the country.

While appreciating that many universities are helping small and medium-sized enterprises with R&D, Moon asked them to play an even bigger role, adding that the government will provide maximum support when necessary.

It is the first time that Moon has invited such a large gathering of university heads together at the presidential office, and comes as South Korea seeks to decrease its dependence on Japan for key technology.

Japan is poised to remove South Korea from a “whitelist” of countries that enjoy streamlined trade relations with Japan, adding to export controls on Seoul that Tokyo introduced last month.

The moves are widely understood to be retaliation for recent court rulings ordering some Japanese firms to compensate Korean victims of wartime forced labor.

In a bid to mitigate possible negative impacts of these export restrictions, Seoul National University announced earlier this month that it will set up a special advisory team to support a stable supply of 100 materials, components and equipment.
Share
Print
List